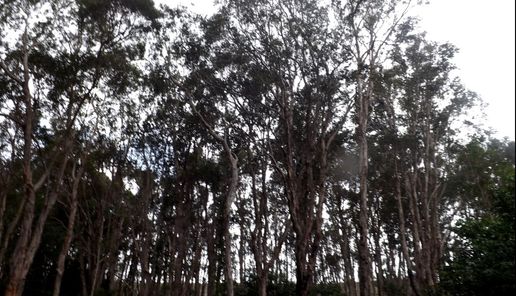 Her story: a Nyangbul journey through time and place

My Traditional homelands is Bordered by coastal plains, hinterland,  rainforests and is ideally positioned as one of the worlds most magnificent  relaxation and activity centre.  Situated in the most unique echo systems  that take in the Brunswick River, Ballina and Evans Head.

Ngangbul it is one of  17 dialects or languages spoken within the Bundjalung Nation.  I am a descendant of Babba Jack (John)  Cook(1854-1961),  recorded the Custodian 1960's living at Cabbage Tree Island. Our Clans Totem is the 'Dolphin' (Gwandi) Mythological site of the Dolphin is found in the Richmond River, a special  and sacred place and story of 'How Dolphins Came  About'. There are many stories of dolphins each has its origin and sacred dreaming site(djurbil).

My fathers uncle, Douglas Cook recalls stories from his father and mother of the massacres in the 1850's to  1900's. His mother Susan was born at Bangalow her father was Jack Fawcett  early settlers did not know how to read or right) took this name from her father Jack Fawcett and Bobby Fawcett. She was the last of the Brunswick River Tribe and a descendant of the People from the Brunswick River.  Susan met Bubba at a race meeting in Mullumbimby and was married at Whyralla  near Lismore they had seven sons and five daughters. The Cook family was recorded as using a 45,000 year old site for ceremonies in our traditional homelands.

Bubba was  known to have use ceremonial sites at Mt Butherm near Mullumbimby,  Wooyong, Tyagrah North of Byron Bay, Byron Bay,  Broken Head,  middens and camping area at the Pass and Taylors lake he was also known to  be the last man to lead ceremonies at Broken Head, and Evans Head, some of these  ceremonies and gatherings he initiated was to celebrate rain its banishment or  its forth coming. His son Douglas Cook often practiced spiritual business at Wooyung near Brunswick Heads, Broken Head, Ballina and the Evans River.

Before settlement coastal and  inland boundaries of the Ngangbul people were patrolled by  Ngangbul warriors to keep the uninvited out. Mythological story of the  Goanna and Poison Snake Dreaming story create western, northern and  Southern tribal boundary of our People. Song lines  created by dream time giants trails was used by visiting clans as passage to attended gatherings, ceremony,  feasts, festivals, initiation of young boys and seasonal gatherings.

The Brunswick river is the boundary between Ngangbul and Minyangbul tribes before settlement Where the Byron Bay Lighthouse stands was once a  traditional  bora ground used to invite other Bundjalung clans in the  north & west to ceremonies initiated by our tribe, when  the flames are igniting.  Distant clans formed pilgrimage to  our festivals returning kidnapped wives and children to our  homelands.

Butherm stories or lore established customs, lore/law. These stories tell of the legendary journey of the Three Brothers who  first came to this land with their families and mother. The Eldest  Brother Yarbirin according to legends handed down the lore/law of the land  from  Bubarah the Creator (God) whom then taught his brothers Mamoon and  Birung.

Nyangbul Custodians are direct descendants of Yarbirin the  Law/Lore Maker.  Our dreamtime stories beliefs, ceremonial and  spiritual stories was past down through customary law and through our  elders in ceremony, today we survived as the original inhabitants for  over 60,000 years.

Margaret Sharpe records 'Gabenbah' a  Ngangbul word from Byron Bay meaning (place near the big scrub).  To
learn more about Lois and her people the Traditional Owners contact her for a  leisurely tour. or make a booking to hear her stories of legends and country.